Summary of the Project

Head and neck squamous cell carcinoma (HNSCC) is the sixth most common cancer worldwide with about 550,000 new cases diagnosed annually. Early stage disease is routinely treated with surgery and/or radiotherapy and has a high chance of cure. Patients with locally advanced disease often experience locoregional and distant recurrence and have a 5-year survival rate of approximately 50%. Primary radiochemotherapy or postoperative radiochemotherapy are standard treatment for patients with locally advanced HNSCC. Due to the biological heterogeneity of HNSCC, the patients’ response to treatment is highly variable and the reliable stratification of HNSCC patients for prediction of outcomes is of great importance.

Our previous studies demonstrated that CD98hc-associated signaling plays a central role in the regulation of HNSCC radioresistance and may be a promising biomarker for radiotherapy and a promising target for tumor radiosensitization as well as T cell-based immunotherapy. Based on a previously established anti-CD98 monoclonal antibody and a switchable chimeric antigen receptor system (UniCAR) proof of concept could already be shown to destroy radioresistant HNSCC cells both in vitro and in vivo. 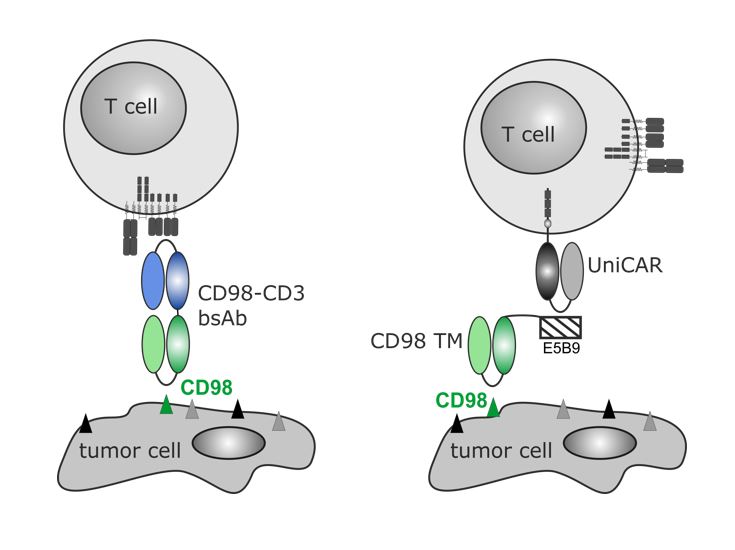 left panel, The CD98-CD3 single-chain bispecific antibody (bsAb) can mediate cross-linkage of T cells and CD98+ radioresistant HNSCC leading to MHC- and TCR-independent activation of T cells and subsequent tumor cell killing. right panel, UniCAR engineered T cells can be specifically redirected for elimination of tumor cells in the presence of a CD98-specific TM (CD98 TM) that is composed of an antibody-derived binding domain against CD98 and the E5B9 peptide epitope recognized by the UniCAR. @ Claudi Arndt